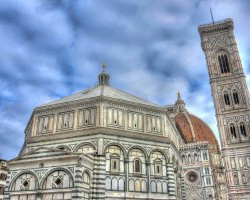 Booking a shore excursion in Livorno is just perfect, especially if you’re planning to visit the region of Tuscany, the Cradle of Renaissance, and the marvelous cities of Pisa and Florence.

These Italian cities are very well connected and they are close enough, so it’s possible to enjoy all the beauties in Tuscany with just a simple wonderful one or two days trip.

The Port City of Livorno

Livorno is one of the most important port cities in Italy, and that makes it a perfect stop for a lot of cruise in Italy and in the Mediterranean Sea.

Livorno might be a little city, but there are some wonderful places to visit and see as well.

First of all, you can’t miss Terrazza Mascagni, a beautiful observation deck that will give you a unique view over the sea.

Not fare from there, you can find the Monument of the Four Moor (Monumento dei Quattro Mori in Italian), which is considered to be the symbol of the city: they are four statues, tied at the feet of Ferdinando I de’ Medici, Grand Duke of Tuscany.

If it’s summer, another pleasant activity is a quiet walk at the beach of the Flat Rocks: a perfect spot where you can also sit quietly and admire the magnificence of the surrounding environment.

A swing by in Pisa: the marvelous Piazza dei Miracoli and the Leaning Tower

Pisa’s less then 25 km away from Livorno, so it’s really easy to include it in your trip: if you decide to travel by train from Livorno to Pisa, your journey  will take less than 20 minutes and you’ll find yourself in one of the most unique city in Europe.

The first stop in Pisa has to be the famous Leaning Tower, a medieval building that it has to be considered almost like a real miracle of architecture.

If you’re not afraid of heights, you can book a ticket and enjoy a freaky climb to the top: you’ll fell like you’re walking on a moving ship and, when you join the top, you could get the impression you’re going to fall from the pending side.

Right in the same square, Piazza del Duomo (best known as Piazza dei Miracoli, which translated means Miracle’s Square) there’s the Cathedral of Pisa, another beautiful building and majestic building, raised at the ending of the XI century.

A day-tour in Florence

But the best of Tuscany is yet to come: the former Capital of Italy, Florence, is waiting for you, at very short distance from Livorno and Pisa.

Florence is one of the most beautiful Italian cities, and it’s only 1 hour away from Livorno, and there’s a lot to see there, but if you have only some hours you should focus on the most important ones.

The Cathedral of Santa Maria del Fiore, for example, is totally a must-see: a Christian-Catholic which construction started in 1291 and the last details were added in 1906. Some of the artists who contributed are nothing less than Giotto and Brunelleschi. If you’re in love with Art, you just can’t miss it!

And if you a big fan of art, then Galleria degli Uffizi is the place you’ve been looking for, for all your life: a prominent art museum very close to the square Piazza della Signoria, with many incredible and famous paintings of the world, realized by some of the most amazing artist, like Giotto, Michelangelo, Leonardo, Botticelli, Cimabue, Caravaggio, just to name a few.

And if you want more, some meters from the beautiful Piazza della Signoria, you’ll find yourself close to Verdi Theater and Palazzo Vecchio. From here, you can walk easily and cross the River Arno taking a walk on one of the most famous bridges in the world, Ponte Vecchio (Old Bridge).

We use cookies to ensure that we give you the best experience on our website. If you continue to use this site we will assume that you are happy with it.Ok